What Is A Diving Bell? (Types & History)

When we think of stays underwater, beyond a breath hold, we may think of scuba diving, surface provided air systems, underwater habitats, and even submarines.

The first device to allow prolonged stays underwater was the diving bell, a device that is still in use today in an upgraded version.

The writings of the Greek philosopher Aristotle from the 4th century B.C. mention a device that could be considered the forerunner of today’s diving bells.

What is a diving bell?

A diving bell is a chamber used to transport divers from the surface to depth and back in the ocean, for the purpose of performing underwater work. The most common types are the wet bell with an open-bottom and the closed bell.

Unlike a submarine, a diving bell is attached by a cable to a surface support vessel. The cable is used to lower and raise the diving bell.

Along with the cable are communication lines, power lines, and air hoses.

There are three types of diving bells, the wet bells, closed bells and rescue bells.

The original concept is simple to understand.

One of the early usage was to recover items from the ocean floor. There are records of salvage operations using diving bells as far back as the 15th century.

A person or two would get into a device open at the bottom with a bench inside. The people and the device would be lowered into the water.

As the device sank, water would enter the bottom, compressing the air inside and trapping it.

When the device reached the desired depth, the swimmer would exit the device, look for items to retrieve and return to the device for a fresh breath of air.

They could do this a number of times before the carbon dioxide became to high within the device.

The people, salvage and device would be hoisted back to the surface. The operation could then be repeated.

While original designs had many shapes, a bell shape became the most common due to its stability.

You can test the principle for yourself by submerging a piece of paper in a glass in a sink full of water.

Take a sticky note and place it on the inside bottom of a drinking glass. Fill a sink with water deeper than the height of the glass.

Place the open end of the glass on the surface of the water and slowly press down, keeping the opening level. As you do so, you should notice two things.

First is that it become harder to push the glass down and second the water level inside the glass is lower than the level outside. The air pressure inside will be equal to the pressure of the water.

If you slowly reverse the movement, when you get the glass clear of the water, you will find the paper is still dry. If you have children, you can amaze them with this science-magic trick.

While a great concept, it had some severe limitations. The first would be when the swimmer exhaled they would add carbon dioxide to the air they were rebreathing, which limited the time they could stay below.

The second would be the space the air occupied.

As the water pressure increased and the air pocket compressed, it had a smaller volume to be inhaled as well as less space for the swimmers head.

Denis Papin in 1689 theorized that a set of blacksmith bellow could force air down a hose into the bell.

This would provide fresh air as well as increase the volume of air. While the concept was good, the equipment of the time was inadequate.

It was almost a hundred years later that John Smeaton invented an air pump able to complete the task.

Wet diving bells are still used in commercial diving today. They are often used to take divers with heavy equipment to a depth to complete some work.

The concept of the diving bell also lead to the development of the dive helmet and armor diving suit.

A moon pool uses the same principle of air pressure against water pressure.

An room with a hole in the floor is pressurized to keep the water out. Entry to the room is by a set of airlocks.

A closed diving bell is considered a pressure-vessels.

The pressure inside the bell is kept equal to the water pressure outside the bell. A closed diving bell has a hatch in the bottom that is normally sealed.

When a diver is to enter or exit the bell, the hatch is open. As the pressure inside and out are equal, no water enters the bell.

One of the concerns with both types of bells is decompression sickness (DCS).

In the early days, many died due to the lack of understanding of DCS. Divers who have been underwater beyond no decompression limits will need to decompress.

A closed system can act as a Surmersible Diving Chamber (SDC) and provide a safe environment to decompress.

There are two methods that can be used.

Divers that need a shorter decompression time, one measured in hours, would follow a procedure similar to one being in the water.

Pressure is slowly lowered and decompression stops are made, except the divers are dry, warm and able to move around.

When a diver has been underwater to the degree that they have reached nitrogen saturation, the decompression is measured in days not hours.

The diver will need to decompress one day plus one day for every 100 feet (ca. 30 m) of depth.

In a situation like this, the SDC acts as an elevator. The pressure inside the SDC is kept at the bottom pressure.

When it reaches the surface, it is connected to another chamber that is at the same pressure.

At times, the divers returning to the surface are just having some time off, rotating with another crew.

In this case, they may stay in the new chamber without it decompressing and return to the work site in the pressurized SDC.

One adaptation of the SDC is the rescue bell.

A rescue bell has a docking system to connect to the hatch on a submarine.

A water tight seal is secured between the two vessels and the hatches can be opened allowing those inside the submarine to enter the bell and to be lifted to the surface.

Mans ability to explore underwater was greatly enhanced by those early inventors and application of the diving bell.

It was the first step that lead to many of the opportunities we have today.

Not many people outside of commercial divers will every experience one.

Have you? Feel free to leave a comment if you have ever experienced one or have any questions. 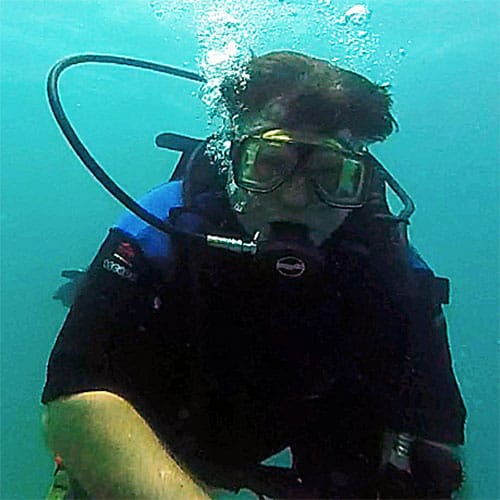 Charles Davis, The Scuba Diving Nomad, has been an active diver for over 20 years. He has combined his three passions in life namely travel, scuba diving and writing.

Over the years he has written nearly a thousand travel and scuba diving articles as well as books on travel, scuba diving destinations and photography.