The Great Barrier Reef was designated as a UNESCO World Heritage Site in 1981, and for good reason.

This incredible coral reef stretches 1,400 miles of East coast of Australia, from Cape York Peninsula in northeastern Queensland, to Bundaberg in the south – and it can be seen from space! It’s comprised of 600 islands and approximately 2,900 individual reefs.

Not only this, but the Great Barrier Reef boasts over 600 types of coral, which provide homes to 1,625 fish species and 133 species of sharks and rays.

The Great Barrier Reef is also one of the seven wonders of the natural world, alongside Mount Everest, the Grand Canyon, and other natural marvels.

Needless to say, scuba diving the Great Barrier Reef is a top bucket list item for all divers and is a must-dive in your lifetime.

You likely have some questions, so let’s get into it!

Is the Great Barrier Reef for beginner divers?

The short answer – yes! Many liveaboards and day trip charters are perfect for those who have just obtained their Open Water certification, and a few offer the option to earn your certification on site.

As popular as this site is, it’s also one of the most beginner friendly destinations in the world.

It’s also important to note that most charters are nearly full service, meaning after you set up your gear the first time, they’ll swap tanks for you while you chill on the deck with a pineapple slice in your hand.

You’ll also get a ton of professional photos to choose from!

What Type of Marine Life Will I See?

As you’d expect, the Great Barrier Reef is teeming with marine life! If you’re a lover of macro (small) creatures, or you’re fascinated with larger species, you’ll find it all here and you won’t be disappointed!

Shark lovers rejoice! There are many shark species that call the GBR home, including the silky, silvertip, whitetip, and grey reef sharks.

You may also run into a whale shark or hammerhead.

Common sightings include the graceful eagle and manta rays, and playful loggerhead and green turtles.

Smaller species can be found in abundance around the corals, making this experience a delight for macro photographers.

Keep your eyes out for clownfish darting around their anemone friends, electric purple anthias, schools of yellow snapper, and of course, colorful parrotfish.

Is the Great Barrier Reef dying?

A 2021 study, reports indicate that region-wide, hard coral cover on reefs was high and had increased to 39% in 2021.

In 2020, most of the surveyed reefs experienced heat stress accumulation that produced widespread coral bleaching, but many reefs affected seem to be recovering this year.

A win for our oceans, however, I’d recommend making your way to the Great Barrier Reef sooner than later, as we can’t predict environmental factors and there’s no guarantee it will be there in 20 years when you’ve finally made time to go!

What’s the Best Time to Visit?

You can scuba dive the Great Barrier Reef with great conditionals all year long! Keeping that in mind, it’s important to note that the kind of experience you’ll have will vary depending on time of year.

This is because seasonal marine life activity and water conditions vary throughout the year.

When is the best time to visit the great barrier reef?

Most divers consider August to December to be the absolute best time to dive the Great Barrier Reef.

This is likely because these months have the greatest water visibility and the least wind and rain.

Looking for specific marine life on your trip? Manta rays and hammerheads visit the Coral Sea from April to September and Minke Whales make an appearance during June and July.

With world-class coral reefs, visibility up to 60m, one of the top-rated shipwrecks in the world and a mix of beginner friendly and challenging dive sites – there’s something for everyone at the Great Barrier Reef!

Because of the expansiveness of this coral reef, it can be quite difficult to categorize the major diving areas and break down what you can expect in each region.

Some regions are harder to access than others, making the dive sites more untouched and worth the trek and some are perfect for a one-day adventure to knock the GBR off of your diving bucket list.

Because of the complexity of this expansive area, I’ll be breaking down the Great Barrier Reef into four major dive regions and giving you the 411 on what to expect on your epic adventure.

It can be reached within 90 minutes by most high-speed boats.

For this reason, it’s accessible by liveaboards, dive resorts, and day charters. More divers head here than any other region of the Great Barrier Reef.

This area tends to be shallow and sans-currents, which makes it perfect for beginner divers.

You can expect to see a ton of different hard corals, caverns, ledges, reef fish and sharks, turtles, and more in the outer reef.

During the cooler months, you may be lucky enough to spot whale sharks and manta rays in the outer reefs. Be on the lookout for Maori Wrasse, Jacks, Barracuda, and Trevally.

Some of the top-rated dive sites in this area include: Thetford Reef, Moore Reef, Flynn Reef, Hastings Reef, Norman Reef and at the far outskirts, Pellowe Reef.

There are liveaboards that explore these sites, including Rum Runner, which offers short and action-packed trips, lasting just 1 – 2 days, and Ocean Quest, which offers fluro night dives and is the cheapest option around.

You can always opt to go with a day trip, like I did.

With this option, each morning of your choice, you’ll be taken out to dive the sites and then brought back to land for the night by the dive operators.

I had an absolutely incredible experience on a day trip to the Outer Great Barrier Reef.

The surface temperature was around 27 degrees Celsius and there was so much marine life to be seen!

My personal favorites were watching my Dad swim with a Hawks Bill Turtle (age 5-10yrs) and the Divemaster tricking us into thinking that Black Sea Cucumber was ‘Whale Poo.’

Check out my video of the experience here:

The Ribbon Reefs are a 75-mile chain of ten individual reefs, about 50-100km further north than the Outer Great Barrier Reef.

This area boats some extremely special dive sites and is home to an array of coral and fish species, including Sweetlips, Coral Trout, and Triggerfish.

Generally speaking, the ribbon reefs are no more than 450m wide and tend to be fairly shallow, reaching as high as to 5m below the water’s surface.

Due to their greater distance from the city of Cairns, these reefs are both more pristine, meaning they are very healthy and relatively untouched.

You will see turtles, reef sharks, manta rays and whale sharks during the colder months and cetaceans, including minke whales!

Generally, divers characterize the ribbon reef into 10 separate reefs, which not too surprisingly are numbered ribbon reefs #1 through to #10 – there are many fantastic dive sites around each. Some of the most popular sites include:

best way to fully explore the best dive sites around all ten of the ribbon reefs is undoubtedly with liveaboard.

This area is generally regarded as one of the very best diving destinations in Australia due to both the superb visibility, pristine coral reef and many large pelagic species found here.

The most common sharks here are silver tip and grey sharks, but all of the previously mentioned species can also be seen and its common practice to organize special shark feeding dives for those prepared to experience the ultimate adrenaline rush.

It’s important to note that this is one of the few Great Barrier Reef dive sites that’s mainly suited for more certified divers and experienced divers because of poor visibility and strong.

Some of the most popular sites include:

More about the Yongala wreck:

Only discovered in 1958, the Yongala Wreck is now widely considered to be one of the hands down best wreck dives in the world. Lying on a 33-meter-deep sandy bottom; this mighty shipwreck is in excellent condition, although it’s illegal to actually swim inside due to the fact that all of its passengers perished, making it a gravesite. Can you say, spooky?

Although the wreck is cool, the main reason for diving here is because of the huge variety of marine life that comes around the wreck.

Osprey Reef is without a doubt among the all-time most off the beaten track dive destinations of the Great Barrier Reef. Generally speaking, you can only visit the Yongala Wreck with those same liveaboards that venture to Osprey Reef.

Only a few liveaboards venture this far, and we recommend going with Spoilsport.

This area is a little different than the rest, because it isn’t accessible from Cairns, rather further South, but we couldn’t leave out this incredible area!

The Southern Great Barrier Reef is a mecca for mesmerizing marine life. You can expect to see turtles, manta rays and humpbacks whales here.

There are 21 different dive and snorkel sites here. The two top sites are:

How to Get There

If you’re already in Australia, you can also reach Cairns via Queensland Rail or drive there.

To get to the last area mentioned, the Southern Great Barrier Reef, it’s a little more remote.

To get to Heron Island, you’ll need to hear to the nearest commercial airport, located 72kms from Heron Island, in Gladstone via Brisbane with either Qantas or Virgin Australia.

Once in Gladstone, you have a choice of two transfer options to get to Heron Island itself: boat, or the pricier option of the two, helicopter.

Access to Lady Elliot Island Eco Resort is on small aircraft chartered from Seair Pacific to transport our guests to and from the Island.

Other Things to Do

Queensland has a ton of attractions and activities available topside as well besides your dive trip. It’s really an outdoor-lovers paradise all around.

I recommend hiking through the tropical rainforests of Daintree or Barron Gorge National Park. It was absolutely lush and beautiful there with so many colorful birds.

You can also take a tour to visit Aboriginal Rock Art deep in the outback of Australia and get some cultural knowledge from your trip or take a trip to the spectacular waterfalls at Atherton Tablelands.

With reports of coral bleaching increasing and large parts of the reef dying off due to warmer ocean temperatures, it’s probably best to try to visit and dive the reef as soon as possible before it all disappears.

It’s worth the trip! Trust me! 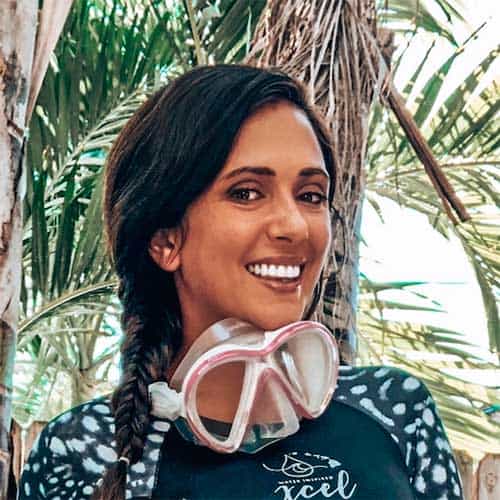 Caitlin is a PADI Scuba Instructor, Scientific Diver, and Science Communications Specialist. She is also the founder of Eco-ConsciousDiver.com, a marine conservation educational platform for divers. 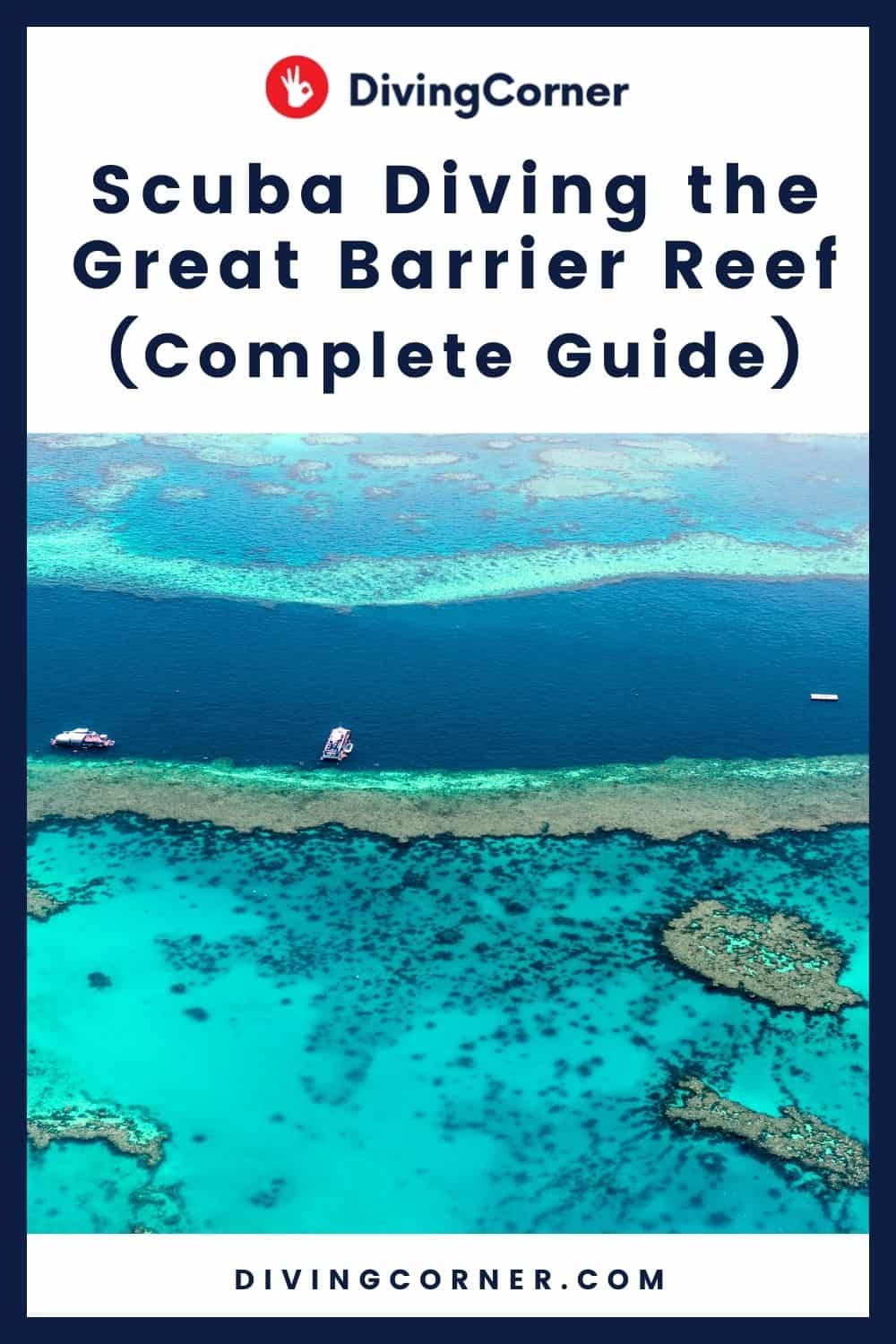